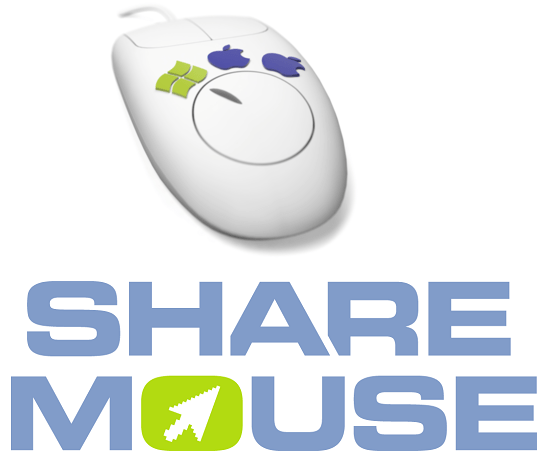 The software “ShareMouse” lets you control multiple computers from a single mouse and keyboard. Move the mouse to the monitor of the computer you wish to control and the pointer magically jumps to that computer. Any mouse and keyboard input is transmitted to the corresponding computer.

Similar to a network KVM, ShareMouse transmits mouse movements and clicks through the local LAN. All traffic can be password-protected and AES encrypted.
To switch between computers, there is no additional hardware or press of a button required.
Similar to a keyboard switch, you can seamlessly operate multiple computers on your desk from any mouse and keyboard.

Clipboard Sharing
ShareMouse can share the clipboard between multiple computers.
Copy any formatted text or files into the clipboard and paste it any other computer with a single key press.

A whole new Synergy
ShareMouse can sync several events and actions between computers:

There is no extra hardware required. ShareMouse uses your existing network connection.

Two Computers and one Keyboard
ShareMouse allows you to operate two computers with one keyboard and saves you from buying a USB switch or keyboard switch. Any keyboard input on any computer is processed by the computer with mouse focus.

Two Computers and one Mouse
ShareMouse also includes mouse sharing, allowing you to operate two computers with one mouse. Unlike a physical mouse switch, ShareMouse doesn’t require you to press any button. Instead, just move the mouse to the computer you wish to operate.

System Requirements:
Microsoft Windows 10
A minimum of two computers is required.
Each computer must have its own monitor.
All computers must be connected in the local network.