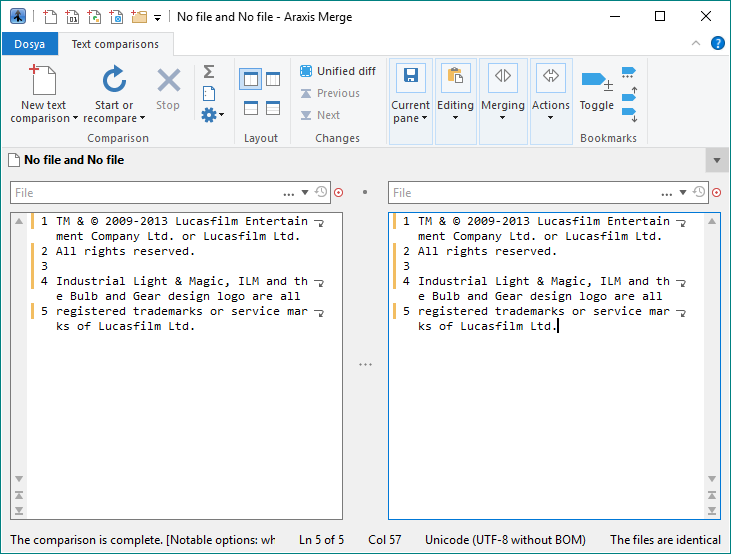 For legal and publishing professionals:
instantly identify every change between different contract or manuscript drafts. Directly open and compare the text from Microsoft Office (Word and Excel), OpenDocument, PDF and RTF files. Copy text from other applications (such as Microsoft Word) and paste it directly into a text comparison.

For code reviewers and auditors:
identify in context every change made between two or three source code hierarchies. Create a standalone HTML or XML report of your findings. Add bookmarks and comments to a file or folder comparison, then save it as a single-file archive for emailing to other team members for review.

For software engineers and web developers:
compare, understand and combine different source file versions. Work quickly and accurately, whether you are comparing individual files or reconciling entire branches of source code. Use three-way comparison to integrate changes made by you, and those made by a colleague, with a common ancestor version. Synchronize a website with its staging area via FTP using the supplied FTP plugin

For release and quality control managers:
compare different source code branches to give total confidence that you know and understand every change made to every file for a specific release. Compare product releases to be certain that only the expected files have been modified. Create an HTML or XML report of changes for audit purposes.

Other users:
Whether you are working with multiple revisions of text files or need to keep multiple folder hierarchies in sync (for example, between a desktop and laptop machine), Merge could help save time and reduce errors by helping you to work quickly and accurately.

Text comparison and merging
– Merge enables you to compare and work with different revisions of text files, such as program source code, XML and HTML files. Merge can extract and compare the text from Microsoft Office, OpenDocument, PDF and RTF files. XML files can be shown with special formatting, helping you to see changes more clearly. It supports files with ASCII, MBCS and Unicode character encodings.
– Merge shows detailed highlights of changes within lines. It can be configured to ignore differences in whitespace and line endings, as well as changes in lines matching specified regular expressions. The latter is useful for ignoring unimportant changes such as timestamps or expanded version control keywords.
– A colour-coded side-by-side comparison makes it easy to pinpoint at a glance similarities and differences between files. Linking lines are drawn between the documents showing clearly how they are related.
– Point-and-click merging helps you choose the parts of each file that you would like to add to a final merged version by simply clicking buttons. The in-place editor with unlimited undo enables complete control over the merged file as you create it. The text comparison display dynamically updates as the merge progresses.

Compare text from common office file formats
– Extract and compare the text content from Microsoft Office, OpenDocument, PDF and RTF files. Copy text from other applications and paste directly into a text comparison. (Note that office document layout and formatting is not shown in text comparisons.)

Image and binary file comparison
– Merge doesn’t just compare text files. Use image comparison to compare many different types of image file and instantly see which pixels have been modified. Binary comparison enables you to identify differences in data files at a byte level.

Folder hierarchy comparison and synchronization
– Merge supports folder hierarchy comparison and synchronization, enabling you to compare and merge entire directory trees. This is ideal for detecting changes in different versions of source code or web pages. You can even use the efficient byte-by-byte comparison option to verify the contents of recordable CDs or USB thumbsticks.
– With support for a variety of archive formats (.zip, .tar, etc.), Merge enables you to compare archives as if they were folders. Compare the contents of an archive to a folder to verify its contents, or to see which files have changed since the archive was created.
– The Professional Edition of Merge supports three-way folder comparison (with automatic merging capability), enabling two revisions of a folder hierarchy to be merged with their common ancestor or some other folder hierarchy. This can be especially useful when used in conjunction with a source code control or software configuration management system.

Direct access to configuration management (version control) systems, Time Machine and FTP sites
– As well as being able to compare files and folders on local drives and network shares, Merge comes with plugins for Git, Mercurial, Subversion and Perforce. In addition to providing read-only access to older versions of the files you are comparing, the plugins make it possible to perform a folder comparison of a local Perforce or Subversion client workspace against the repository. Alternatively, different branches (or the same branch at different points in time) within a repository can be directly compared. A similar plugin for AllChange is available from Intasoft.
– Merge integrates with local Time Machine‡ volumes, so you can open any earlier revision of a file or folder. Open the same file or folder in both the left and right comparison panes, then use the Versions button to compare a file or folder with another revision of itself.
– An FTP plugin gives Merge file and folder comparisons direct access to files located on an FTP server. It is therefore possible to use a folder comparison to synchronize a local copy of a website’s content with the main site itself, provided the main site is running an FTP server.

Printing, automation and other advanced features
– Other features include the ability to print a hard copy of file and folder comparisons, and to customize the behaviour and appearance of the application, including fonts, colours, whether the display is split horizontally or vertically, and more.
– A full Automation or AppleScript API and Command-Line Interface are included, allowing close integration with other applications (such as source/version control and software configuration management (SCM) systems) or your workflow.
– Comprehensive online documentation is available from the Araxis website, including context-sensitive help for very dialog and dialog control.